Abbas holds a diploma of Industrial automation from Alnajah University in Nablus whereas he is the eldest of a family that is consisted of 6 brothers and this family used to suffer from financial circumstance where their father used to work as a photographer with a monthly income that doesn’t acceded 800$ where the 5 brothers of Abbas are still students. After the graduation of Abbas, he stayed unemployed for around 1 year then through the social media he knew about ACAD and he visited ACAD F Nablus branch asking for a loan that covers his new project which is producing “Carton cups” since he has a humble experience in operating and maintenance of Industrial Machinery. ACAD financed Abbas with 10.000$ after preparing an extensive study of the marketing process, which required a careful study to ensure the success of the project. After a couple of months of launching the project, the monthly income acceded  $900 where he became able to repay the loan, All his family members became part of his new business even his grandmother, every member of the family has his own duties and tasks and his shift. Abbas aspires to increase revenues and manufacture new products such as tissue paper and some detergents. 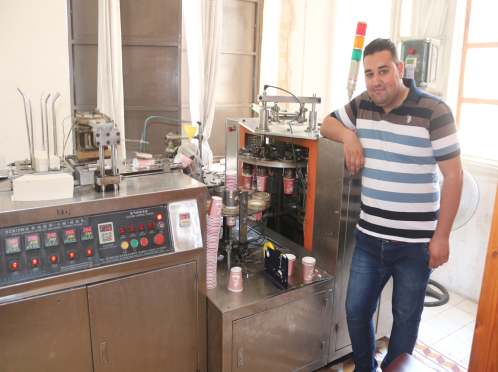